Many Bibles and Leaves and Manuscripts are on SALE now! 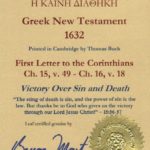 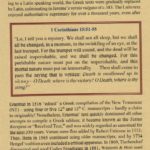 1 CORINTHIANS 15:49-16:18. “Victory Over Sin and Death”. The Greek New Testament. Novum Testamentum. Printed in Cambridge by Tho. Buck, 1632. FIRST CAMBRIDGE EDITION. The so-called “Textus Receptus” or Received Text. Since Erasmus’ early Geek text of 1516, it was the dominant text for translations until about 1850 when earlier/better manuscripts were being discovered. Ref: STC 2796, Herbert 4678. SUPERIOR condition (see pic). COA on premium “gold leaf” paper. English trans. on COA, 15:51-57. Text is the 3rd part of Ch 15 on the significance of Jesus’ resurrection (and ours), arguably the most important chapter in Paul’s letters.