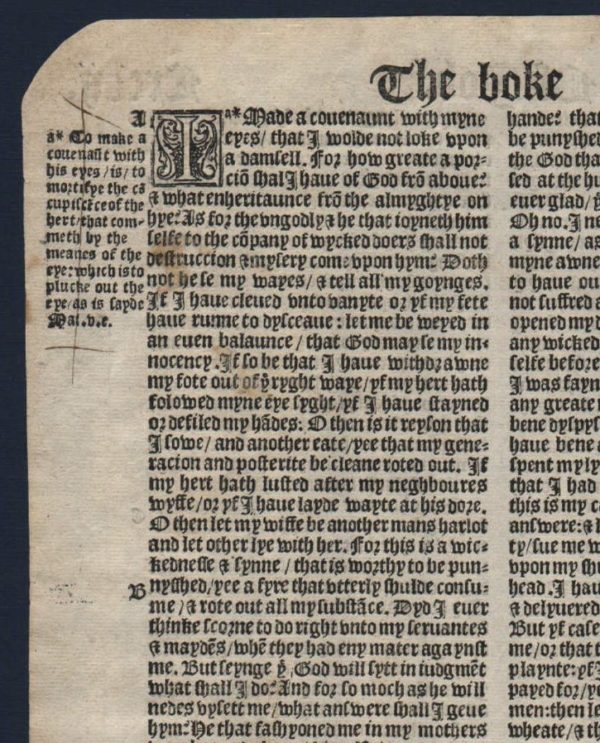 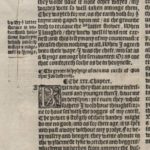 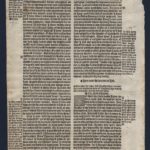 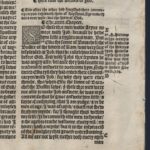 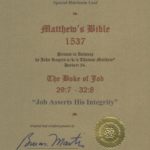 JOB 29:7-32:8. “Job Asserts His Integrity”. Printed in Antwerp by John Rogers a/k/a Thomas Matthew, 1537. Reference: Herbert 34. [This leaf is absolutely genuine, being identical to a facsimile of the 1537 Matthew Bible]. 60 lines per col., w. 3 woodcut initials, 13″ x 9″. EXCELLENT condition. Very clean, albeit with a small stain to Ch. 30B / 31A and to top inner corner (see pics). Small clip to top inner margin, and older rounded outside corners (see pics). Some very small cuts to outer edge, up to 1/8th inch. Note the “Xed” out side notes, a method for conforming to a 1543 law forbidding Bibles with Tyndale’s notes, though in fact they are entirely John Rogers’; see Herbert p.19. None-theless, Matthew’s Bible was authorized and licensed by King Henry VIII to be distributed and sold in England, likely not knowing that “Thomas Matthew” used all of Tyndale’s translations in this Bible! A very respectable leaf of this important Bible.

Leaf and premium COA set in a large Bifold Portfolio.

The Bible was financed by London booksellers Richard Grafton and Edward Whitchurch, for whom 1500 copies were made — but fewer than 20 copies are extant. Scholars generally agree that this is the first English Bible to be translated directly from the original tongues, Hebrew and Greek. The Coverdale Bible of 1535 was translated from Luther’s German Bible, supplemented by Zwingli’s Zurich Bible, Juda, and the Latin Vulgate. The Coverdale Bible therefore was not as satisfying to scholars as was Matthew’s Bible. However, modern scholars acknowledge that Matthew’s Bible is a mixed-bag of translations. This was due to the incompleteness of Tyndale’s manuscript translations at the time of his execution in 1536. While the New Testament is entirely Tyndale’s, his translation of the Old Testament extends from Genesis through Second Chronicles, plus Jonah, “and no more of Holy Scripture” according to Hall’s Chronicles, Sir Fredrick G. Kenyon’s 1909 English Versions, and Herbert’s Catalogue of English Bibles. The rest of the OT, with the exception of the Prayer of Manasses (Roger’s own translation) is very likely a Rogerian edit of Coverdale’s 1535 Bible using Rogers’ “intermediate” knowledge of Hebrew. Scholars admit that, during Tyndale’s exile, “his” manuscript translations of the OT (from Joshua thru 2nd Chronicles) was very likely the work of several translators, including Rogers. Rogers himself was martyred in 1554 or 1555.